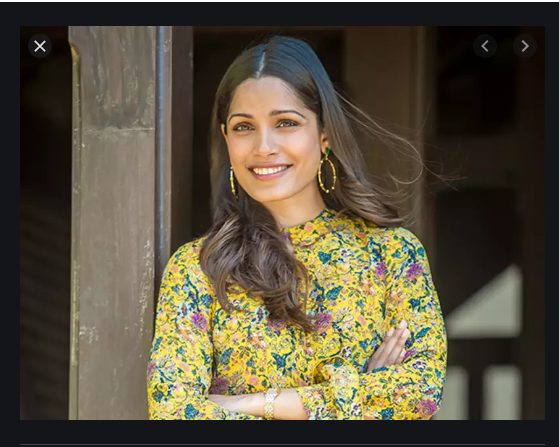 Freida Selena Pinto, popularly known as Frieda Pinto, an Indian actress who predominantly works in American and British films. She was born and grew up in Mumbai, India, and discovered her love and a keen interest in acting at a young age, since then, she aimed to become an actress. Following her passion, she completed her studies and kicked start her career. Initially, she worked as a model for few years and later became a television presenter. The most talented and versatile star gave brilliant performances in Hollywood movies. While her Hollywood debut was ‘Slumdog Millionaire’ and rose to fame soon after appearing in that movie. Well, to know more, let us dig out some lesser facts!

1- Holds a degree in English Literature

The actress, Frieda Pinto comes from a noble, educated family as her mother Sylvia is a school principal and her father, Fedrick is a senior bank manager. While her sister Sharon is a news Producer and working for the leading news channel. Pinto pursued a degree in the field of English Literature.

The actress is a multi-talented star who has initially worked as a model for many notable brands and later worked as a television presenter. While after some time, she then moved into an acting line and started appearing in films.

Frieda Pinto is the pretty awesome lady who has acted in the most popular film ‘Slumdog Millionaire’ for which she got appreciated a lot and rose to fame after appearing in that movie. The film became an instant hit of the year.

Frieda Pinto gave a tryout for the Bollywood film titled ‘Chak De India’ starring Shahrukh Khan, but she got rejected by the filmmakers as she did not look Indian. At the same time, she signed the ‘Slumdog Millionaire’.

Frieda Pinto got featured in many magazines including People Magazine and appeared in the Most Beautiful People List’ of World’s Best Dressed Women’. Alongside, she also considered among the Top 10 Most Stylish Women’ included in Vogue magazine in 2009.

The heartthrob Bollywood actor, Hrithik Roshan praised Pinto for her remarkable performances in a biopic movie named ‘Desert Dancer’ which was directed by Richard Raymond. The Krish-3 actor was so much impressed by Frieda Pinto.

While searching about her, we got to know that Frieda Pinto does not like to look herself in the mirror. And she is aware of her identity whenever she hears about Slumdog’s Latika is described as the most beautiful girl in the world, she feels good.

In 2012, the most celebrated actress joined Plan International Campaign ‘Because I’m a Girl’ as Global Ambassador and promoted gender equality to lift millions of girls out of extreme poverty.