Tormented by his past, a garbage man named Clean attempts a quiet life of redemption. But, soon finds himself forced to reconcile with the violence of his past. 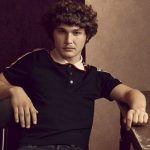