Feature film adaptation of the musical about a teenager from Sheffield, England who wants to be a drag queen. 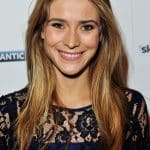