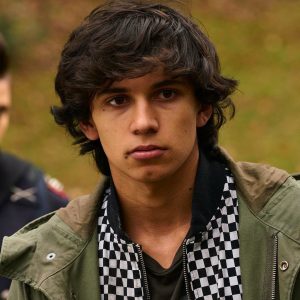 The actor and musician Ajay Parikh-Friese born as Jay Parikh is an American/Canadian. He has appeared in five Netflix Original Series, including Lost in Space (2018), Riverdale (2017), and Dirk Gently’s Holistic Detective Agency (2016).

His debut in the film was released in 2019 as a lead in the critically acclaimed Riot Girls (2019) (from the executive producer of Insidious (2010)).

Friese began her acting career in live theatre, including playing Oliver Twist in Oliver! and Puck in A Midsummer Night’s Dream.

In addition to acting in several professional theatre and opera companies, he especially loves playing The Phantom in his high school’s production of Phantom of The Opera.

Ajay is also a songwriter and recording artist beyond his work on screen and stage. His debut album, due in 2021, was recorded in NYC with Bon Jovi’s Everett Bradley as producer.

Three Vancouver Island Music Awards were given to Ajay’s band Close The Bombay Doors’ EP while he was in high school.

His band, which performed at the 2014 Rifflandia Music Festival, included a lyricist, lead composer, guitarist, vocalist, and singer.

Throughout his career, the young star who is blessed with multiple talents has won millions of hearts with his excellent talents and tremendous performances.