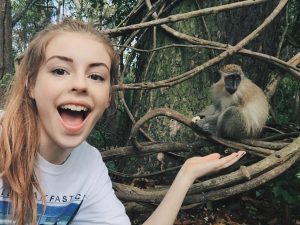 The young English star, Amelia Gething, is known for her comic writing skills and is notable for being an actress and YouTube star. She features and writes for the BBC show named ‘The Amelia Gething Complex’ and played Ursula Pole in the Starz historical drama named ‘The Spanish Princess’. She is also known for writing surreal comedy as well.

In mid- 2018, Amelia Gething was approached by the BBC to create a comedy series. It was intended to be a female-led comedy sketch show, which later became ‘The Amelia Gething Complex’.

The show was created by CBBX In-House Productions, its first season was released on BBC iPlayer in October 2019. Later, it was aired on BBC Two a month later.

Along with Amelia Gething, Natalia Hinds, and Jasmin Hinds as Amelia’s flatmates, Poppy and Vinny star on the show. Among others, Alex Griffin -Griffiths as Wallace, the trio’s neighbor. The show is comprised of 18 episodes and two seasons.

From 2017 to 2020, Amelia Gething acted in ‘Saturday Mash-up’ and she appeared in its four episodes.

During her showbiz career, the multi-skilled star gained immense popularity but she rose to fame after making an appearance on the show named ‘The Amelia Gething Complex’.