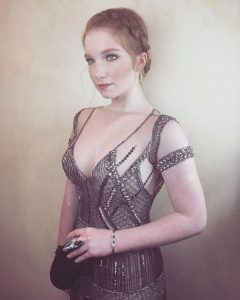 The actress and model Annalise Nicole Basso was born on 2nd December 1998. Her siblings are Alexandria Basso and Gabriel Basso. They are also actors. She is notable for Bedtime Stories (2008), Love Takes Wing (2009), Standing Up (2013), and Oculus (2013) are among her credits. From 2014 until 2015, she gave an outstanding performance in the television series, The Red Road.

Basso was born to Marcia and Louise J. Basso and she is their youngest child. She started off her acting career with TV commercials. And later, she made guest appearances and small roles in TV series. She is of English, German, Irish, Scottish, and one-quarter Italian, descent.

Thereafter, Basso started appearing in movies as well for which she got much appreciated by everyone. She grabbed everyone’s attention with her role of Eden Hamby in ‘True Blood’ in 2008.

Basso appeared in ‘Nikita’ in 2010. In 2011, she appeared in episodes of ‘New Girl’. However, the actress made her wider career by giving heart-winning performances in various films and TV series for which she got praised.

Basso got immense popularity in her career life and that’s what she always wanted to achieve in her life. She calls it one of the biggest achievements.