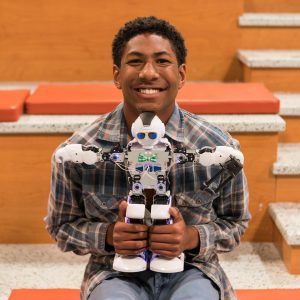 Armani Barrett is an American actor, who was born on 13th November 2000. He is 21 years old and is a high school graduate and a new face in the film and TV industry.

He is one of the most talented actors who is blessed with multiple talents. He is not just an actor, yet an admirable singer and dancer as well.

The young star, Armani Barett started off his career in his teenage. And he emerged as a well-trained actor, dancer, singer, and all-rounder entertainer.

Armani is popular for his series on the new hit Nickelodeon show named ‘I’am Frankie’. In the series, he appeared as Byron Patrick, an adorable shy boy. The series was comprised of 20 episodes. And his performance was truly appreciated.

Armani Barrett is also a co-star and writer of the fantastic web series named ‘Side Kicks’ for which he got applauded.

As a born passionate star, he has been getting praised by many for his performances and multiple talents.

He appeared as the special guest lead singer for the amazing musical ban Play Masters, a single released in 2017.

Well, the young star has been doing a great job in dynamic fields and has made his name in the industry.

During a brief career, Armani Barrett has made his place in the industry and is known for his incredibly amazing work and contribution to the cinema.