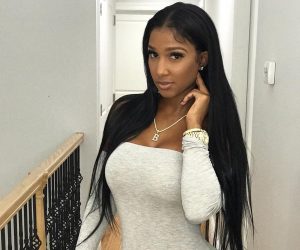 Burgos has two daughters named Ashley Burgos and Sarai Burgos. She is the founder of Bold & Beautiful, where she sells sleepwear lines for a woman of “all shapes and sizes” to feel comfortable, confident, and bold at the same time.

She has worked as a bartender and server before starting her modeling career. Later, she started in the modeling industry in her mid-20s. She starred in Rick Ross’s music video Diced Pineapples and released the song in 2012.

She has resumed booking modeling jobs since. Bernice has appeared in the comedy series Wild ‘N Out, as well.

In an interview with The Breakfast Club, she talked about her struggles. “Having a child at 15, I had to like rush into being a mother… I’m over here being pregnant at 15. It was so embarrassing because if you all think I have a babyface now when I was 15, I looked like I was 7. People were like, ‘Oh my God! A baby having a baby.’… It just felt like, I don’t know, it didn’t feel good… I’m 15, but I got to act like I am 30.”

She talked about the hard times she had been through. “The pregnancy changed my life. My grandmother kicked me out of the house, and I had to live with my boyfriend’s mom. I didn’t pay rent, and they forced me to do chores around the house to live there. The burden was so big for me I had to drop out of school.”

“After dropping out of high school, I worked as a bartender. I took part in modeling on the side, and it led me to a career as a video vixen.” Her outstanding personality and body made her an on-the-spot favorite with photographers and magazine editors. At the start of her career, she starred in magazines, including SHOW and XXL.”