Betty Marion White Ludden was an American actress and comedian who was born on 17th Jan 1922 and died on 21st Dec 2021. She was a veteran actress who spent more than seven decades in a showbiz career. She was notable for her work both in front of and behind the camera.

She is remembered as the first woman who produced a sitcom named ‘Life With Elizabeth’ in the USA and contributed to her being named honorary Mayor of Hollywood in 1955. Betty White is also referred to as the “First Lady of Television”, a title used for a 2018 documentary detailing her life and career.

Betty White became popular for appearing in the American game shows, including Password, Match Game, Tattletales, To Tell the Truth, The Hollywood Squares, and The $25,000 Pyramid; dubbed “the first lady of game shows”.

Betty White was the first woman who was awarded the Daytime Emmy Award for Outstanding Game Show Host for the show Just Men! Which was aired in 1983.

Additionally, White became famous for her performances on The Bold and the Beautiful, Boston Legal, and The Carol Burnett Show.

However, the late actress has made her extensive career and gained huge popularity in her acting career. Still, she is living in millions of hearts.

The actress is still known for her well-praised work and gained fame after appearing in the 2009 romantic comedy film The Proposal (2009).

Known For: Famous for starring in Betty White: A Celebration movie 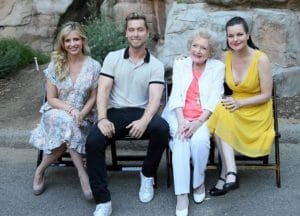