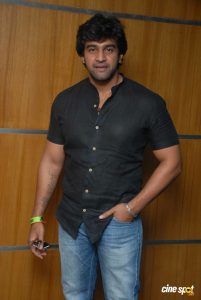 Chiranjeevi Sarja made his debut in the Kannada movie Vayuputra (2009) ( A romantic and drama film) in the lead role. For that film, Chiranjeevi has won the Innovative Film Award for Best Debut (Male).

Chiranjeevi Sarja is exceptionally classy, good-looking, talented and most popular Actors in Kannada Film Industry. Chiranjeevi Sarja was engaged to actress Meghana Raj on Oct 2017 who has appeared in Kannada, Malayalam, Tamil and Telugu films and finally, this couple tied a knot on 2 May 2018.

• Chiranjeevi Sarja primarily works for Kannada Film Industry and established himself as the most popular actor.
• Chiranjeevi Sarja made his debut in the Kannada movie Vayuputra (2009) in the lead role.
• In October 2017 Chiranjeevi Sarja was engaged to actress Meghana Raj who has appeared in Kannada, Malayalam, Tamil and Telugu films and then they married on 2 May 2018.

• Chiranjeevi Sarja worked as an assistant director with his uncle Arjun Sarja for about 4 years.
• His brother Dhruva Sarja is also an actor in Kannada films who made his made in Kannada film industry in 2012.