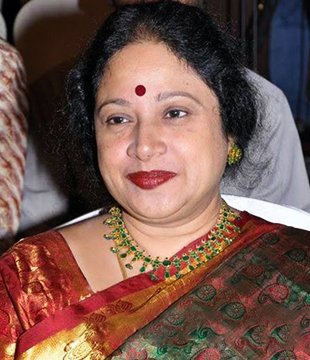 Jaya Chitra, a Kollywood actress who was born in 1957, hailing from Andhra Pradesh. She is the lady who entered the film industry at the age of 10 and appeared in the Telugu movies. She is mainly known for the role played in the Telugu movie named “Bhakta Potana” for which she got immense love and positive response from critics and viewers. However, she has acted in a large number of movies and marked her identity in the Telugu cinema.

The passionate lady, who took the start of her career at the age of 10, has worked in various movies for which she got huge acclaim and appreciation. While her fans noted her for her amazing acting prowess. She made her Telugu film debut “Bhakta Potane” and since then, she frequently appeared in many movies. A Telugu film director screen-tested her during her teenage. All the filmmakers were impressed with delivering her dialogues. Later, she appeared in three movies which were directed by K.S. Gopalakrishnan. She also worked in Tamil movies and one of her most popular movies including “Korathi Magan”. Also, she has shared the screen space alongside Kamal Hassan and the duo appeared in the movie “Ilamai Oonjaladugirathu”. Moreover, she also did Kannada and Malayalam movies for which she got much recognition. Some of her best movies are “Ponnukku Thanga Manasu”, “Kalyanamam Kalyanam”, “Sathyam” and others that are worth sharing. She also made an appearance in the remake of the Bollywood movie “Guddi” (a Tamil movie- “Cinema Paithiyam”). Also, she acted in the Telugu movie named “Kalpana” which was a remake of the Hindi movie named “Anamika”. However, she has worked in several movies and won the hearts of many with her remarkable performances.

Jaya Chitra gained huge fame and much recognition throughout the career and she calls it one of the major achievements of life.