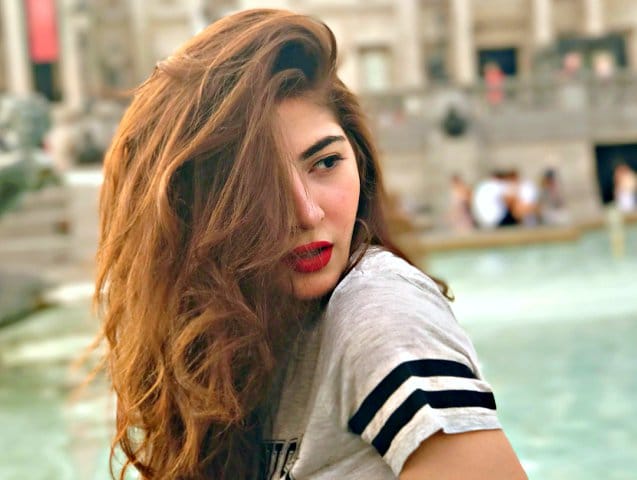 Naimal Khawar is a renowned Pakistani actress, as well as a model, made her first acting debut with the movie titled Verna. Naimal rose to utmost fame with her role of Izza in drama serial “Anaa” aired on Hum TV.

Naimal Khawar was born in Islamabad, Pakistan on 17th November 1992. She fascinated by showbiz when she was quite young, and always desires to be a prominent part of the Pakistan showbiz industry. Naimal is not only a famous actress though also a painter, model, and VC Designer.

Naimal Khawar initiated her showbiz career with modeling, and presently she has a massive fan following with her remarkable acting abilities and charming looks. She has done numerous photoshoots for top fashion brands in Pakistan. Naimal Khawar also starred on the front cover of numerous fashion magazines.

In the year 2017, she got an opportunity to portray her talent in a Lollywood movie titled Verna, wherein she portrayed a supporting role, though she got immense appreciation and praise from the viewers for her acting abilities. After this movie, Naimal Khawar got numerous offers for different projects. Presently, she is starring on a television serial titled Anaa aired on Hum TV. She starred in a number of morning shows as a guest.

Naimal Khawar earned her graduation degree from Roots College, Islamabad. She also attended the National College of Arts, Islamabad with the intention of pursuing her visual arts diploma. Naimal is the mixer of Persian and Pashto beauty as her mom was a Persian and her father was a Pathan which makes her more appealing from others. A renowned Pakistani director spotted her on Instagram and provided an opportunity to work for him as a model. Naimal becomes enormously famed in a shorter time span with her looks and talent.

Her father’s name is Khawar. She also has a younger sister Fiza Khawar who is also a prominent part of the Pakistan showbiz industry. She recently tied the knot with a renowned Pakistani actor named Hamza Ali Abbasi. Naimal Khawar is Muslim by Religion, and Her Zodiac Sign is Scorpio. She is 26 years old with 5 feet 6 inches Height. Naimal’s weight 52 KG and body size are 34-25-34. She has Hazel Eyes and Blonde Hair.