Dawber studied in Reid Elementary School in Goodrich and visited North Farmington High School. She attended Oakland Community College (OCC), to transfer to a four-year college. She decided to delay her studies at OCC to do some part-time modeling work, later left out.

She was basically a fashion model with Wilhelmina Models which is a modeling agency company and moved to New York City, before switching to acting. She has acted in many television commercials during the 1970s.

Dawber screen-tested for the title role in Tabitha, a 1977–1978 situation comedy turned off from Bewitched, but the role instead went to Lisa Hartman. However, ABC-TV was fascinated enough with her to hire her in its “talent development” program, which paid its members until they could find appropriate roles.

Garry K. Marshall, an American film-and-television comedy writer-producer-director selected Dawber from this program. Dawber decided to return to television and starred in the short-lived sitcom Life and Stuff on CBS, in 1997. Then in 2014, she rejoined with Robin Williams on his comedy series The Crazy Ones as a love interest of Williams’s character.

But the meeting failed to boost the show’s ratings, and it was canceled shortly afterward. Unfortunately, Williams, already suffering from Lewy body disease by this time, died by suicide later that year.

Dawber is a national spokeswoman for Big Brothers Big Sisters of America which is a 501 non-profit organization. Garry K. Marshall, the film-and-television comedy writer-producer-director died in 2016. He enabled Dawber’s professional breakthrough.

She as Marcie Warren “an investigative journalist” was first appeared with Mark Harmon as “Gibbs” on the NCIS in 2021 for four episodes, where Gibbs sits near a diner.

She married the actor Mark Harmon on March 21, 1987, in a separate ceremony. The couple has two sons: Sean Thomas Harmon also an actor, and Ty Christian Harmon scriptwriter, he chose to build a career behind the cameras.

The couple keeps a private family life and rarely appears in public with their children or speaks about one another in interviews. 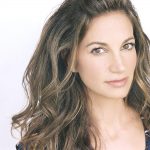