Rebecca Gayheart is an American actress and model. She was born on 12th August 1971, known for her remarkable work and contribution to the industry. She has worked on innumerable acting and modeling assignments for which she got huge applause.

She is known for performing in the short film which was directed by Brett Ratner. There were rumors speculated that she was in a long-term relationship with the film director Brett Ratner.

The stunning actress-model, Rebecca Gayheart started her career as a model in her teenage. She then didn’t look back and continued working as a model on many assignments for well-known brands.

During the 90s, Rebecca Gayheart signed a contract with Noxzema and became a spokesperson for the company. On TV, she did many roles in the series including ‘Earth 2’ which was started in 1994 and ended in 1995.

In 1995, Gayheart appeared as a guest star on ‘Beverly Hills, 90210. In 1997, she then debuted through the comedy ‘Nothing To Lose’, and then she played a lead role in the film named ‘Urban Legend’ which was the best release of the year 1998.

In 1999, she was also featured in the black comedy film named ‘Jawbreaker’. Also, she made appearances in the thriller ‘Shadow Hours in 2000, and ‘Harvard Man’ in 2001.

However, during her career life, the actress has given tremendous performances in numerous films, short films, web series, stage plays, and TV series. Also, she did various modeling tasks for notable brands.

In her entire career life, Rebecca Gayheart received huge acclaim, respect, and appreciation from her die-hard fans, admirers, and viewers. She has worked on multiple acting and modeling projects and became famous for her work.

Known For: Popular by the name “The Noxzema Girl” 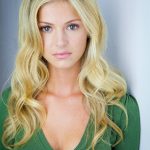