Synnove Macody Lund is a Norwegian journalist. She is not just a journalist by profession, yet she has established her dynamic career by working as a model, actress, and film critic. She is mainly known for her latest release Netflix series titled ‘Ragnarok’ which was streamed in 2020. Also, she is known for appearing in the Sky TV series titled ‘Riviera’ (2020).

Synnove Macody Lund was born on 24th May 1976 in Stord, Norway. She holds a degree in television production and film studies.

Synnove Macody Lund worked as a film critic for NATT&DAG and as a journalist prior to working as a model for many notable fashion brands.

In 2011, she then started working as an actress and first appeared as a Diana Brown in Morten Tyldum’s BAFTAAward film Headhunters (Norwegian, Hodejegerne), an action thriller based on the 2008 Jo Nesbo novel of the same name.

Among other acting credits, as Sara in the short Sandslottet (2014), and as the role of Tonje Sandvik in the drama series Frikjent (2015) alongside Nicolai Cleve Broch.

In 2016, she then appeared as the murderous Johanne Ronningen in ‘Black Windows’ which was a remake of the Finnish series titled ‘Mustat Lesket’.

However, the multi-talented star has established her extensive career and has been a centre of attention among the audience and her fans who never forget to praise her for her admiring contribution.

During her extensive career, the multi-skilled star, Synnove Macody Lund gained immense popularity and recognition from the viewers. 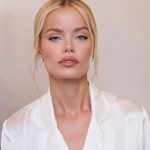