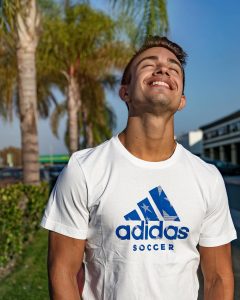 William Shewfelt is a famed Hollywood actor who is known for the amazing work he has given in the movies. He is mainly known for the role of Brody in “Power Rangers Ninja Steel”(2017). He has worked in several short and independent movies and has marked his identity in the cinematic world. He was also featured in various commercials and modeled for many notable brands.

He was born on 19th May 1995, California, USA where he raised and grew up with siblings. His maternal side is from Guyana and is of Indo-Guyanese (South-Asian) background. William Shewfelt always credits his parents who supported him throughout his career.

He studied from the University of California, San Diego where he studied economics. Later, he became the President of the Undergraduate Economic Society and earned a degree in economics. Being good at studies, he was so adventurous and energetic as he participated in various activities, and sports, such as; Football, Jump Rose, Running, Soccer, Swimming, and others.

William Shewfelt started his career with the “Red Power Ranger on Power Rangers Ninja Steel” in which he played the role of Brody for which he got immense love and recognition from his millions of fans. The most-watched television series was aired in the year 2017. Alongside this, the young actor also appeared in Coca Cola’s “Taste the Feeling” music video.

He also featured in “This Side of Summer” and other short films for which he became the king of millions of hearts across the world. Also, he appeared in various commercials and independent films.

Apart from this, he modeled for various brands exclusively men’s’ wear. Alongside this, he has also appeared in a large number of health and fitness podcasts.

Also, he marked his name in the field of music and released his first rap single “Rising Sun” and “Cannonball” in 2019. Also, very few people know that he is a great author and has written “The PE Diet” with Dr. Ted Naiman.

The young, multi-skilled boy was nominated for the most popular, all-time-favorite Television Actor at the Kids Choice Awards held in 2018.