She grew up in Virginia and considers it her hometown. She studied at Forge High School in Stafford in Virginia. Shannon is probably a writer, too. Her Instagram bio says that. She keeps her personal life private and away from all the excitement of the industry. She has shared little information about her life outside of acting and she’s not very active on social media.

In 2017, Shannon attended Carnegie Mellon University in Pittsburgh and holds a BFA in drama. She also attended the London Academy of Music and Dramatic Art (LAMDA) in Hammersmith, London.

She is also talented in music activities. According to her, she can play Djembe, Rollerskating, Drives Manual Transmission, Yoga, Playwriting, Freestyles, and Choreography. Shannon has also attended the Atlantic Acting School Summer Ensemble in New York City.

She enjoys Viewpoints Book by Anne Bogart, Meisner, Improv, and Butoh. She has 13.5k followers on her Instagram account.

Known For: Famous for starring in Black Christmas Movie 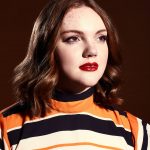