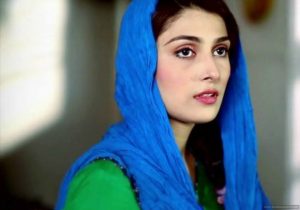 Ayeza Khan was born on 15 January 1991 in Karachi, Sindh. She has a real name, Kinza Khan. Ayeza Khan is a Pakistani television performing actress and stunning model. Ayeza has completed her graduate studies from Newports Institute of Communications and Economics, Karachi.

Ayeza Khan mostly works in Pakistani Television Industry. She was made her acting debut by playing out the role of Shehna on TV Serial Tum Jo Miley (2009). The gorgeous actress, Ayeza Khan showed up on the television screen with a supporting role Ajia in the sentimental drama serial ‘Tootey Huwey’ which was broadcasted on Geo TV. Because of the success of this drama series Ayeza Khan got fame on the top score. Her phenomenal extraordinary performance in the social drama ‘Pyarey Afzal’ received positive recognition in addition to the Lux Style Award in the Best Actress category.

Ayeza Khan is married to Danish Taimoor who is a famous actor of Pakistan showbiz industry. They got wedded in 2014 and later on had two children. They are cheerfully married.