Elizabeth Jean Philipps aka Busy Philipps (born on June 25, 1979) in Oak Park, Illinois, U.S. She is an American actress.

In 2018, she published the book This Will Only Hurt a Little. She opened up About Being a Survivor of Sexual Abuse on The Ellen Show. On the show, she is encouraging others to speak their truth and never keep something in. “This conversation needs to happen more, and people need to first teach your children to speak up, never be ashamed, and think that it’s your problem and your fault because it’s never your fault. You were a child. Period.”

Favorite TV Show:
Friends or any bedtime program on HGTV 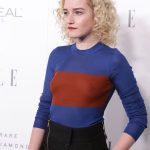