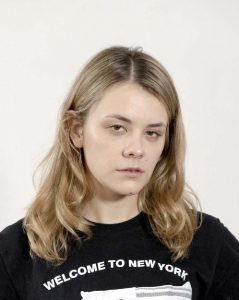 Daria “Dasha” Dmitrievna Nekrasova, was born on 19th February 1991 in Minsk, Belarus. She was born to parents who were known to be acrobats. At the age of 4, Dasha moved to the USA with her parents.

Dasha joined high school at Las Vegas Academy of the Arts where she settled. In 2008, she completed her graduation, and later, she joined Mills College where she studied Sociology and Philosophy.

She is an actress, writer, director, and podcaster by profession. She became famous after her interview with an InfoWars reporter, known as Sailor Socialism.

Dasha Nekrasova acted in many films and television series. Also, she appeared in music videos for renowned artists, such as; Yumi Zouma. Later, she debuted through a film named ‘Wobble Palace’. It was co-written and directed by Eugene Kotlyarenko.

Dasha Nekrasova made an appearance as a leading character in the dark comedy named ‘The Softness of Bodies’. In the film, her performance was undeniable.

In 2018, she was honored with the title of Sailor Socialism for showing her support for Bernie Sanders, she dressed up in a Japanese schoolgirl uniform resembling Sailor Moon. Her clip was featured on Venezuela in a segment in an episode of ‘Last Week Tonight With John Oliver.

Dasha Nekrasova appeared in the third season of HBO drama ‘Successsion’ as Comfry’, a crisis PR rep. In the series, she appeared as a lead character.

However, Dasha has acted in more than 20 films/series for which she got much appreciation. Some of them are most popular, such as; ‘The Serpent’ 2021, ‘Normalize’ 2017, ‘Steps’ 2017, and many more that are worth sharing to watch.

The multi-talented lady, Dasha Nekrasova became famous after winning the title of Sailor Socialism for extending support for Bernie Sanders. Her video clip went viral wherein she could be seen dressing up as a Japanese schoolgirl.