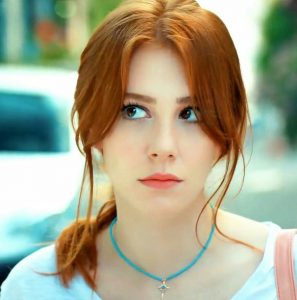 Elçin Sangu was born on 13 August 1985. Elcin is a Turkish actress and model. She is best known for her leading role Defne in the Star TV romantic comedy TV series Kiralık Aşk from June 2015 until its finale in January 2017. For this work, Elcin Sangu has been nominated and has received many awards in Turkey, including three Golden Butterfly Awards, Yeditepe University Wish Award’, ‘Makinistanbul Media, Art, and Sports Award’, ‘Aegean University Media Award’, ‘YBU Media Award’, ‘Ayaklı Gazette TV Stars Award’, ‘Magazine Journalists’ Association Golden Lens Award’ and others.
Elcin Sangu also showed up in the following television series so far.

Elçin Sangu, as the single child of an ethnic Circassian family from Izmir in the Western bank of Turkey. Elcin graduated from Opera Department at Mersin University and took acting lessons at the Sahne Tozu Theatre. In 2011, she was given a role as Jale in Kanal D drama series Öyle Bir Geçer Zaman ki, where she also sang and played the piano.

Between 2012–2013, Elcin performed the leading role of Nehir in Aşk Kaç Beden Giyer. From 2013 to 2014, she starred as Eda in Bir Aşk Hikâyesi, an adaptation of the South Korean television series I’m Sorry, I Love You. In 2014, Elcin Sangu depicted Güzide in chronicled episode drama series Kurt Seyit ve Şura filmed in Russia, Turkey, and Ukraine. Following another leading role in 2015 TV series Sevdam Alabora, Elcin started acting in Kiralık Aşk the same year. In 2016, she became the face of Sunsilk and Boyner.

The prominent romantic comedy Tv series Kiralık Aşk aired on Star TV until its finale in January 2017. Her TV role received critical acclaim. In 2017, it was reported that Elcin Sangu would appear in a new series on Kanal D. At that year in August, Sangu together Baruş Ardıç were cast in the movie Mutluluk Zamanı (previously titled Yanımda Kal and Gitme Sen)