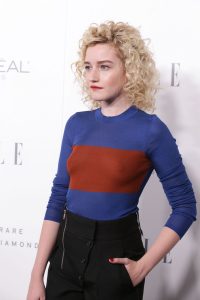 An American actress Julia Garner, known for her role as Ruth Langmore in the Netflix crime drama series Ozark (2017–present), for which she was awarded two Primetime Emmy Awards for Outstanding Supporting Actress in a Drama Series.

Julia Garner was a shy girl in her childhood, and that’s why she started taking acting lessons at the age of 15 to overcome her shyness.

At the age of 17, Julia Garner debuted with Sean Durkin’s Martha Marcy May Marlene, playing the role of Sarah. Subsequently, she started getting many acting gigs.

The actress, Garner became famous for appearing in Bravo true-crime series Dirty John, started in 2018 and ended in 2019.

Moreover, she is notable for appearing in the movies including Martha Marcy May Marlene (2011), The Perks of Being a Wallflower (2012), and many more.

In addition to this, Julia Garner is recognized for her roles in Sin City: A Dame to Kill For (2014). Undoubtedly, her performances are undeniable.

Julia Garner is the recipient of many awards and honors including two Primetime Emmy Awards for Outstanding Supporting Actress in a Drama Series titled ‘Ozark’.

Net Worth: US$ 2 millions