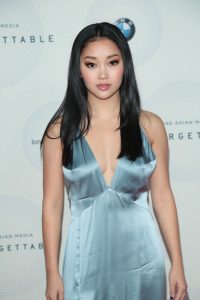 Lana Therese Condor, popularly known as Lana Condor, who is an actress, hailing from America. She was born on 11th May 1997, Vietnam where she raised and grew up along with her siblings and parents. She is mainly known for the role of Jubilee played in the film named “X-Men Apocalypse” which was released in 2016. Additionally, she has worked in various television series named “Deadly Class” aired in 2019.

Initially, she lived in an orphanage in Can Tho, Tran Dong Lan. Later, she was adopted by her foster parents, hailing from America. She then started living with her foster parents named Mary Carol, and Bob Condor. She has a brother named, Arthur.

Lana Condor got Ballet dance classes, under the guidance of Joffrey Ballet from The Rock School of Dance Education. Also, she studied from the Alvin Ailey American Dance Theatre. Additionally, she dances with the Los Angeles Ballet. Also, she got training in theatre plays.

In 2014, she became a theatre scholar at the California State Summer School for the Arts. In 2015, she did graduation from Notre Dame Academy, Los Angeles, USA.

Lana Condor started her career with a debut film “X-Men: Apocalypse” which was released in 2016. In the film, she appeared as the Mutant Jubilee which was directed by Bryan Singer. In the same year, she worked in Peter Berg’s drama film named “Patriots Day”, depicting the events and aftermath of the Boston Marathon Bombing.

In 2017, she worked alongside Julia Jones and James Franco in the romantic thriller film named “High School Lover”. In the same year, she appeared as Lara Jean Covey in Netflix romantic drama film titled “To All the Boys I’ve Loved Before”. It was directed by Susan Johnson and based on the young adult novel with the same name. For this role, Lana Condor earned a nomination for a Teen Choice Award.

In 2019, she also portrayed the role of the assassin Saya Kuroki in Syfy’s action-drama series named “Deadly Class” which was based on the comic book series written by Rick Remender.

Also, she worked in a science fiction film named “Alita: Battle Angel” which was produced by James Cameron. In the film, she appeared as Koyomi, directed by Robert Rodriguez.

Alongside this, she also voiced for the role of Kaoru in the animated series named “Rilakkuma and Kaoru and worked alongside Joseph Cross in the rom-com movie named “Summer Night”.

She is a great YouTube star and launched her YouTube channel in 2020. She has 475,000 subscribers and more than 9.8 million views on the channel.

In 2019, Lana Condor won the MTV Movie & TV Awards for the category of Best Kiss (with Noah Centineo) in the film titled “To All the Boys I’ve Loved Before”.

Known For: Known for role as Jubilation Lee / Jubilee in the 2016 superhero film X-Men: Apocalypse