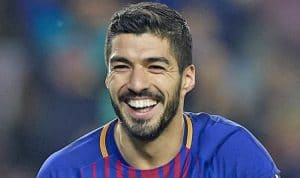 Luis Alberto Suarez is an Uruguayan football player who plays for Atletico Madrid and the Uruguay national team. He is regarded as one of the greatest strikers of all time for his finishing, passing ability, and comfort on the ball.

Here you will be amazed to know that he has won 19 major trophies including seven league titles and a UEFA Champions League at club level, and others.

Suarez started off his professional football career at Nacional in 2005. He is known for his first club which was Groningen, then he moved to Ajax in 2007.

Throughout his sports career, Suarez has won several awards and honors for which he always feels grateful. In addition to this, he has won the Eredivisie Golden Boot, the Premier League Golden Boot, and the Pichichi Trophy.

Besides, Suarez has scored more than 500 goals in his club and national careers. And this is one of his greatest life achievements.

Among his achievements, the 2011 Copa America with Uruguay is the most prominent on the list. Also, he is the winner of nine trophies as well. He is also a winner of the European Golden Shoes, and others.