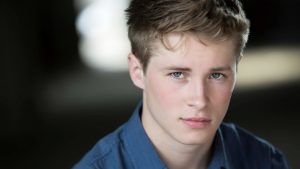 Michael Provost is an American actor. He comes from Atlanta, Georgia, USA where he was born, grew up, and studied. He is notable for his work and dedicated performances. He is mainly known for his portrayal in ‘Insatiable’ which was released in the year 2018.

Michael Provost is of French Canadian, Scottish and Irish descent. He has four brothers, two are older than him and two are younger than him.

Michael Provost acted in a number of movies and television series. But, he became famous for starring in ‘Shameless’ which was considered the best release of the year 2011.

Among many others, Provost starred in #Realityhigh which was released in the year 2017. In the TV series, he shared the screen space alongside Nesta Cooper, Keith Powers, and Alicia Sanz.

Michael Provost has worked with the most celebrated Hollywood stars, such as; Dallas Roberts, Debby Ryan, Christopher Gorham, and many others who are famous for their stand-out performances.

He has been giving enthralling performances since the beginning of his career. And the best is, he has gained a massive fan following.

During his acting career, the young, charming man got huge acclaim and recognition from his die-hard fans and the viewers who showers love and extended support to him.