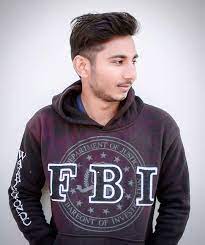 Raaj Vishwakarma is a multitalented Indian emerging actor and YouTube star. He was born on 28th March 1995 in a small town in Rajapur, Chitrakoot, Uttar Pradesh India but made his way straight into Bollywood through his hardworking attitude. He grew up in Rajapur and graduated with a degree in Botany from Chhatrapati Shahu Ji Maharaj University.

There is not much information available about him so we are now telling you 8 hidden facts about him which you will surely love to know!

Very few people might know the fact that Raaj Vishwakarma, In 2012,  changed the spelling of his first name from “Raj” to “Raaj because he liked the sound of the extra “a” in his name! So, Did you know it before?

Do you know his nickname? We can bet that you don’t know it. So we are here to tell you that he is known as Desi Launda in his hometown Rajapur.

3. A very kind-hearted and humble person

We are sure that you don’t k know the fact that he is very kind by nature. He can’t see anyone in trouble and always ready to help others no matter what’s the situation.

4. His Social working side

Many people might not know that he is an active social worker who works for the well-being of humanity. He gathers charities for the poor people and does other social rights work too.

Very few people might know that in the year 2017, YouTube terminated his YouTube account where he posted films and other videos without any warning. He had to do extra hard work to make up for the loss.

The talented star has full fluency in both Hindi and the Bundeli languages. He has a sharp accent and people used to be very impressed by his linguistics skills.

7. A comedian inside a sober personality

It must be an interesting fact for you that he used to make funny videos for his YouTube channel and people liked his funny content as it was a timely comedy that attract the viewers. [1]

It is a hidden fact about Raaj Vishwarma that he is a book addict! He never misses any chance to read the books. He considers books as his best friend which allows him to learn a lot.