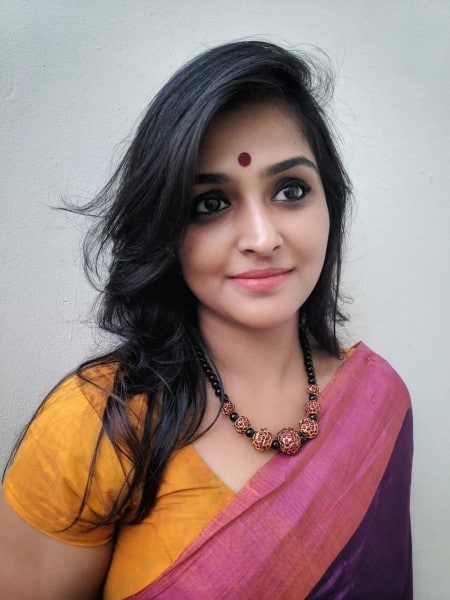 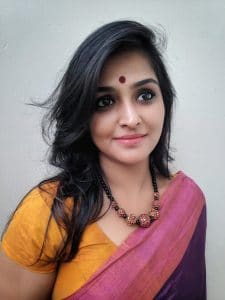 Ramya Nambeesan is a budding Indian movie actress who mainly appears in Tamil and Malayalam movies. She has appeared in more than fifty movies and has sung more than 20 songs.

In the year 2000, Ramya Nambeesan made her acting debut with a Malayalam movie titled Sayahnam as a child star. Pursuing her performances as a child star in a number of Malayalam movies throughout the early 2000s, she moved ahead to play supporting roles, prior playing the leading role in 2006 movie Aanachandam. In the year 2005, she made her Tamil acting debut with the movie Oru Naal Oru Kanavu. Ramya received critical acclaim for her stunning acting in the movies Chaappa Kurish and Traffic. Her other noteworthy roles involve in the movies Left Right Left, Pizza, Monkey Pen, Philips, Jilebi, Lukka Chuppi, Sathya, Sethupathi and Mercury.

Ramya Nambeesan made her playback singing debut with the song titled Aande Londe for the film Ivan Megharoopan. Her song titled Muthuchippi Poloru for the movie Thattathin Marayathu became one of the most demanding songs of the year. Apart from singing and acting, Remya has sporadically worked as a TV presenter too. She also got elected for a Filmfare Award for the Best Female Malayalam Playback Singer for the song “Andilonde”.

Remya Nambeesan was born in Chottanikkara, India on 1st January, 1986. She was born to Jayasree and Subrahmaniam Unni. Her father was a former theater artist, who was also a member of troupes like “Harishree” and “Jubilee”. She has a brother named Rahul, who has starred as a music director in Malyalam movies Monkey Pen, Philips and also as a playback singer in the movie Thattathin Marayathu. She joined Mahatma Gandhi Public School, Ambadimala nearby Chottanikkara. Remya Nambeesan earned her graduated degree in English Communication from St. Teresa’s College, Ernakulam.