In 2013, Estevez starred as Ashley in the short film The Magic Bracelet, produced for the Make a Film Foundation.

She then appeared in the 2013 film And Then There Was You and in the 2015 Nickelodeon television film The Massively Mixed-Up Middle School Mystery.

In 2019, the young actress, Scarlett Estevez appeared in the fourth season of the television series titled ‘Bunk’d’ which was aired on Disney Channel.

However, the child star, Scarlett has been constantly giving wonderful performances and won millions of hearts with her brilliant acting chops.

The young star has been getting appreciation and fame in her acting career. This is incredibly amazing that she has been doing a great job at this age.

Known For: Playing Trixie on Lucifer, Megan in Daddy’s Home 2, and Gwen on season 4 of Bunk’d 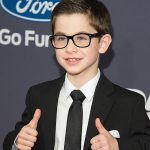