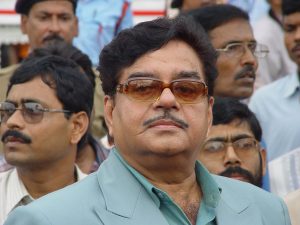 Shatrughan Prasad Sinha, an Indian actor and politician. He is a former member of Lok Sabha since 2009- 2014, 2014-2019) from Patna Sahib and Rajya Sabha (1996–2002, 2002–2008). Also, he served as a Union Cabinet Minister of Health and Family Welfare and Shipping in the Atal Bihari Vajpayee government. However, Shatrughan Sinha spent many years in the field of acting and politics.

Initially, Shatrughan Sinha started his career as an actor. In Dev Anand’s Prem Pujari, Sinha played a Pakistani military officer. In 1969, he was cast as a police inspector in Mohan Sehgal’s Sajan.

His first film was ‘Saajan’ as the release of “Prem Pujari” was delayed. Later, Sinha made villainous appearances in ‘Pyar Hi Pyar’, ‘Banphool’, ‘Bhai Ho Toh Aisa’, ‘Heero’, ‘Blackmail’, and many more that are worth sharing.

The actor made marvelous performances in Bollywood movies for which he got huge acclaim in his career life. Shatrughan Sinha is regarded as one of the veteran and most celebrated Indian actors who have spent years of their lives working in showbiz.

Apart from acting, Shatrughan Sinha also made his career in the field of politics and has been served for many political parties.

Shatrughan Sinha is known for his unique way of delivering the dialogues and his expressions and the way he acts in a particular style is truly appreciated. Undoubtedly, he made his name in Hindi cinema.

Film: Sajan (1969)
Politics: Shatrughan Sinha’s tryst with politics began when he joined the BJP in 1991.