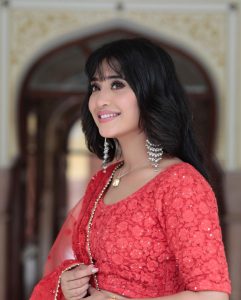 Shivangi Joshi is a household name in the Indian television industry as she has been a part of the longest-running TV serial titled ‘Yeh Rishta Kya Kehlata Hai’ wherein Hina Khan played a lead role. Shivangi has earned praise and acknowledgment for playing dual roles, Naira Singhania Goenka and Sirat Shekwat Goenka from 2016 to 2021.

Shivangi Joshi was born in Pune, Maharashtra, India. She completed her schooling at Dehradun and later, she started her career through the small screen. In 2013, she made her acting debut with Zee TV’s serial ‘Khelti Hai Zindagi Aankh Macholi’.

Later, she played the role of Aayat Haider in ‘Beintehaa’ and also became famous for playing the role of Poonam Thakur in ‘Begusarai’ in which she acted alongside Vishal Aditya Singh.

In 2016, she started playing the role of Naira Singhania Goenka in Star Plus’s Yeh Rishta Kya Kehlata Hai’ in which she acted alongside Mohsin Khan.

In 2020, Shivangi Joshi was about to make a debut film ‘Our Own SKy’, but it was shelved due to the ongoing pandemic. It was later released on the OTT platform.

Shivangi Joshi rose to fame after portraying the dual roles on the TV serial ‘Yeh Rishta Kya Kehlata Hai’ from 2016 to 2021. She gets much praise and love from the viewers.