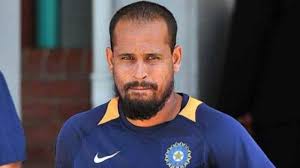 Yusuf Pathan is an Indian former cricket player. He was born on 17th November 1982 in Baroda, Gujarat, India. She was born to a Gujarati Pathan family. She is the elder brother of Irfan Pathan who is also a great cricket player.

Yusuf Pathan along with his brother, Irfan has done philanthropic work during the ongoing pandemic. They distributed masks.

Yusuf Khan Pathan married to Afreen who is a Mumbai-based physiotherapist. The couple is blessed with a son.

Yusuf Khan Pathan had been supporting YAIF and its mission ‘Youth Against Rape’. Pathan made his cricket debut in first-class cricket in 2001/2002.

The most celebrated former cricket player was a right-handed batsman and a right-arm off-break bowler. Yusuf Pathan got retired from cricket in February 2021.

In March 2021, the all-time favorite cricket player Yusuf Khan Pathan was diagnosed with coronavirus but after undergoing treatment, he recovered and felt good.

The cricket player, however, has made his extensive career in the field of cricket. And Pathan got much fame and appreciation from his fans and real admirers.

Yusuf Khan Pathan has gained immense popularity and also made his identity in the field of cricket. Now, he is the inspiration to many. He is known for the style of playing cricket.