Zoya Hussain 29-year-old actress was born in Delhi in a Muslim family. Her schooling education was based in a boarding school in Delhi, which further continued to graduate in Business Studies. Although, with all her studies and other interests; she had always given time to her love and passion for acting and theatre. And with all this, she had also been interested in sports as well as playing musical instruments; at an early age.

Later this interest in acting and theatre made her take part in various theatre plays in her college. And with all this practice, passion, and desire; she went along and moved to Mumbai to start her acting career. But that’s certainly not all to what she has earned and worked on in her struggling days. As along with passionately working as an actor Zoya Hussain also made her name and reputation in the writing world. Zoya Hussain is mostly known for her remarkable acting in film Mukkabaaz playing the role of Sunaina Mishra.

Zoya Hussain started her acting career with her debut film ‘Mukkabaaz’. She was well acclaimed and highly praised for her role as a lead heroine in this film, playing Sunaina Mishra. After her performance in this movie, she received various other projects too. All of them helped her gain more popularity and reputation in the Bollywood industry.

After her debut film, Zoya Hussain played a role in the movie ‘The Brawler’, which was aired in 2017. Following this, she gave us some more amazing movies to adore her acting skills. This includes Namdev Bhau in Search of Silence from 2018, Laal Kaptaan from 2019, along with Teen Aur Adha and Hathi Mere Saathi being released the same year. But that’s certainly not all to what this amazing actress has been doing in her life. As her interest in writing also out boosted while she worked in the industry, resulting in making her write various scripts too. 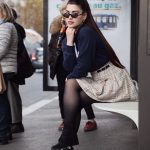