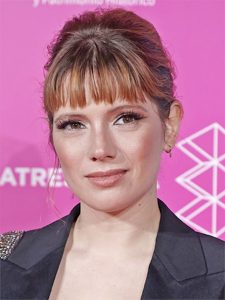 Diana Gómez Raich is a Spanish actress, born on 7th March 1989 in Igualada, Catalonia, Spain. She is best known for her role as Tatiana in the crime drama series Money Heist with co-stars Úrsula Corberó, Álvaro Morte, and Itziar Ituño. She is also known for her leading role in Valeria alongside Silma López, Paula Malia, and Teresa Riott.

Diana Gómez is passionate about dance since her childhood. She has a theatrical background. She made her film debut in 2006 in Salvador – a Spanish film directed by Manuel Huerga. Just after a year, Diana Gómez stepped into television with her debut drama series, La Via Augusta (2007) alongside Mónica López, Francesc Garrido, and Anna Lizaran which was broadcasted on TV3.

After that, she then played minor roles in other TV shows. Diana played an important role in El Secreto de Puente Viejo’s (2011) TV series which was broadcasted on Antena 3.

No awards and nominations.

Known For: Famous for starring in Valeria tv show