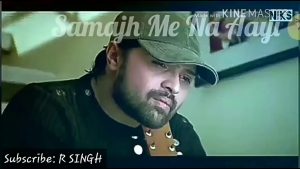 Himesh Reshammiya is an Indian vocalist, music director, Film Distributor, Lyricist, Composer, Film Actor, Screenwriter; Film Producer & Playback Singer who is predominantly recognized for his work in Gujarati and Bollywood movies. He was born in Mahuva, India on July 23, 1973.

Himesh Reshammiya is amongst the most popular composers and singers of Bollywood film industry. As a renowned singer, a few of his superhit songs comprise off Aashiq Banaya Aapne, Tera Suroor, Hookah Bar, Tandoori Nights, Jhalak Dikhlaja and “Shakalaka Boom Boom” amongst numerous others.

Apart from singing, Himesh Reshammiya is also an eminent composer and the movie titled “Dulhan Hum Le Jayenge” was his first movie as a single composer. Afterwards, he has composed music for several movies such as Tere Naam, Humraaz, Maine Pyaar Kyun Kiya?, Aitraaz, Aksar and Aashiq Banaya Aapne amongst many others. Himesh Reshammiya has received a number of awards as a music director and vocalist as well as for his playback singing, his movie titled “Aashiq Banaya Aapne” for which, he received the numerous awards and emerged as one of the most demanded musicians in Bollywood film industry.

Apart from composing and singing music, Himesh Reshammiya has also tried his good fortune at acting and made his first acting debut with the movie titled Aap Kaa Surroor. The movie earned him nomination for the Best Male Debut. Afterwards, he has starred in numerous movies as a leading actor though none of them has made any positive influence at Indian box-office.  Himesh’s performance in a supporting role in Khiladi 786 earned him critical acclamation as well as Best Supporting Actor award at 13th Dadasaheb Phalke Awards.

Apart from singing, composing and acting, Himesh Reshammiya has been constantly involved in mentoring and judging on the sets of singing reality shows such as Music Ka Maha Muqqabla, Sur Kshetra and Sa Re Ga Ma Pa Challenge amongst others. Latterly, he hasn’t been realized much as the modern singers like Armaan Malik and Arijit Singh amongst others have taken over.

Himesh Reshammiya was born to a professional music composer named Vipin Reshammiya. He got married to Komal and the couple was blessed with a baby boy named Swayam. The couple separated in the year 2017. In 2018, he married his ex-girlfriend named Sonia Kapoor.