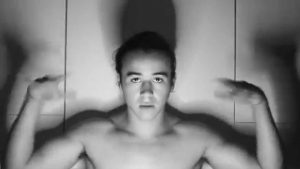 Keean Johnson is an uprising American actor who is predominantly known for his featuring role as Hugo in action movie titled “Alita: Battle Angel”. He gained utmost fame in his career after he portrayed Adam Freeman on Hub Network’s adventure/ action live-action television series titled “Spooksville”.

In the year 2016, Keean Johnson was featured in a co-leading role of Markie Fitzpatrick, alongside David Keith in the comic film titled “Heritage Falls”. In recent times, he starred in RZA directed action movie titled “Cut Throat City” and also starred in Marc Meyers directed thrilling movie titled “We Summon the Darkness”.

Keean Johnson was born in Denver, Colorado, United States on October 25, 1996. He is 22 years old and is single at the moment with no girlfriend. His account on Instagram is full of his cinematography. Keean is the son of an American mom and a British father. His mother is of half Hispanic descent. Keean Johnson portrayed the role of Hugo, Alita’s love interest who teaches her how to play a battler-style Motorball game.

In the year 2019, rumors surfaced that Keean Johnson was in a relationship with renowned actress Sofia Boutella. A few legitimate sources also reported that the couple had also begun dating for more than a year prior their revelation in 2019.

This news came after the two made their initial public appearance together at Los Angeles debut of Johnson’s Alita – Battle Angel. After exposing publically regarding their relationship, the couple also enhanced the frequency at which they shared about each other across social media.

A key talking point of post-announcement of their relationship was the age gap between two of them; Keean is 14 years younger than the actress Sofia Boutella. Sofia has numerous acting credits with her name, amongst them; The Mummy, Kingsman: The Secret Service and Atomic Blonde wherein she had a homosexual sex scene with Charlize Theron.

Net Worth: US$ 2 million approxx.