Actor, director and writer, and producer, Ryan O’Nan is an American born on 25th March 1982. He is most popular for his role as King George in The Queen of the South in 2017. He has had a very successful career with his foot in acting, directing, producing all at the same time. His acting credit includes Fargo, Ray Donovan, Cop shop, Animal Kingdom, Marauders, and many more. He also gave a prize-winning stage performance in ‘The Seagull’. The actor has been doing an amazing job as he has the ability to win the hearts of many. Well, here is a chance to know more about your celebrity and we have compiled some lesser facts regarding his life. Just have a look!

Before diving into his acting career, Ryan was a musician himself and was a part of a band. He has incorporated his love for music in many of his productions such as Brooklyn Brothers Beat the Best.

Ryan studied at the Mesa College Theatre Company in San Diego and got BFA from Mason Gross School of Arts at Rutgers University.

Before rising to heights of fame, Ryan did a number of roles in stage plays as well as TV shows. However, he got extremely lucky when he got landed a role in Ryan Pier William’s ‘The Dryland’, a high-profile feature film where he played alongside famous people America Ferraro and Melissa Pro. According to Ryan, he got the role luckily without even auditioning for it.

4- Work as a Producer and Director

5- Works as a writer

Ryan has written and produced a number of works including the third season of The Queen of the South, Club Life, Chu and Blossom, Wu Tang-an American Saga, etc. He also wrote for Tribes, Marvel’s Legion, and Skins.

Ryan has played in The Iceman alongside Michael Shannon, Chris Evans, and Winona Ryder. He has also played in Eat, pray, love alongside Julia Roberts and has also worked with Nicholas Cage and John Cusack in The Frozen Ground. He has also starred alongside Academy Award winner Melissa Leo who also made a cameo in his Brooklyn Boys Beat the Best.

The multitalented star, Ryan O’Nan was selected for the Young and Hungry: Top 100 writers on the verge in 2016 which is a huge achievement. Even on his Instagram, he shared a photo of himself in his favorite Tee-shirt which featured a book. It seems he is an avid reader and writer. 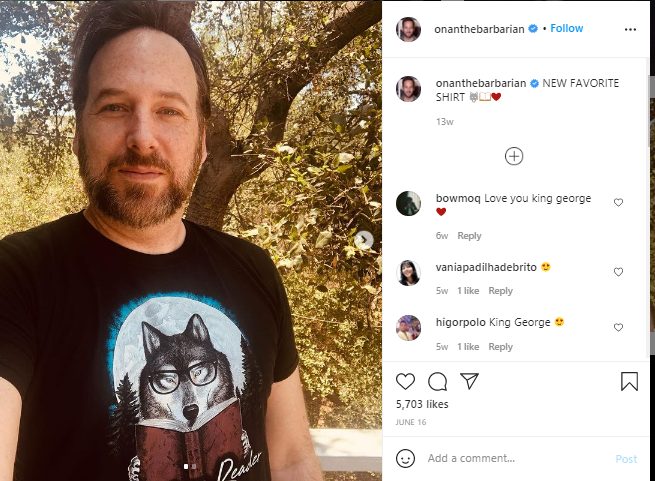 Ryan is very particular about his political opinions and doesn’t shy away from sharing them on social media. Last year in the 2020 elections he was very vocal about his vote for Joe Biden.