He is known for appearing in many roles, like; Adinath Shastri from Asambhav, Nishad from Shubham Karoti. But, his most popular role was of Adv. Om Chaudhary in Eka Lagnachi Teesri Goshta, aired in 2013, in which he shared the screen space along with Spruha Joshi.

Umesh Kamat took the start of his acting career with Marathi commercials. Later on, he moved his interest towards acting in television serials and movies as well.

Kamat is known for his incredibly amazing work and performances for which he always gets much appreciation and praise from his fans and the viewers. 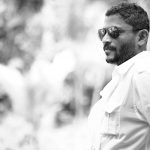