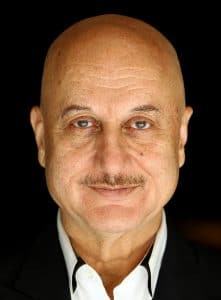 Anupam Kher is a renowned Indian movie actor, filmmaker and director who predominantly appear in Bollywood movies. He has appeared in more than 500 movies, numerous theater plays, and some International movies and has earned utmost fame by his remarkable work.

Anupam Kher was born in Shimla, India on 7th March 1955. In 1982, he debuted as an actor in a Bollywood movie titled Aagman, trailed by Saaransh. He has portrayed imperative roles in megahit movies like Kuch Kuch Hota Hai, Dilwale Dulhaniya Le Jayenge, Veer Zaara and many more. He is globally famed owing to his work in films like, Bride and Prejudice, Speedy Singh, Bend It Like Beckham, and other global projects. Anupam Kher also co-featured in Silver Linings Playbook which earned him Academy Award. In his three and half decade of career, he has esteemed himself as one of the top actors Bollywood has ever gotten.

From 2001 to 2004, Anupam Kher has worked as Chairperson of Indian Movie Censor Board as well as as a Director of National School Of Drama. This highly talented actor has presented a number of TV sitcoms likes Lead India, Sawaal Dus Crore Ka as well as The Anupam Kher Show – Kuchh Bhi Ho Sakta Hai. Anupam has been bestowed by Padma Bhushan and Padma Shree awards by Indian Government for his influence to cinema and arts.

Anupam Kher is considered amongst those actors who didn’t emanated from Indian film industry or nor was a celebrity material. He still gotten a niche for himself in industry and gave unforgettable performances in movies like Lamhe, Dil, Khosla Ka Ghosla, Tezaab and Maine Gandhi Ko Nahi Mara amongst several others. His acting in the movies like A Wednesday and Special 26 requires an exceptional mention. He has also been vocal in speaking about social issues and has also take part in a number of charity shows too.