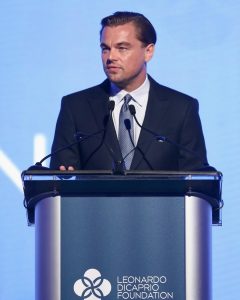 Leonardo Wilhelm DiCaprio, an American actor. He is the man who established himself as the best star. Not only this, but he has been recognized as one of the highest-paid actors. DiCaprio has some credits associated with his showbiz career, like; he is a successful film producer as well.

Apart from acting and production line, DiCaprio is also an environmentalist. As an actor, he is known for his work in biopics and feature films.

Leonardo DiCaprio started off his career in the 1980s. Initially, he appeared in TV commercials. During the 90s, he then started making appearances in various television shows, like; sitcom Parenthood.

His first major film was ‘This Boy’s Life’ in 1993, in which he performed the role of an author, Tobias Wolff. At the age of 19, he gained critical acclaim and also won the first Academy Award and Golden Globe Award nominations for performance in ‘What’s Eating Gilbert Grape’ in 1993.

However, the actor made his wider career for himself and gained immense popularity in his showbiz career. He has achieved positive reviews from the viewers, critics, and fans as well.

Leonardo DiCaprio calls himself a lucky man as he won international acclaim for the epic romance film named ‘Titanic’, released in the year (1997), which became the highest-grossing film of the year.