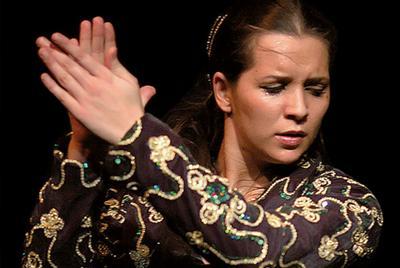 Paloma Fantova Gonzalez is a multi-skilled lady who is blessed with admiring acting talent, yet known for her dancing skills which makes her stand out. In fact, dance is her first love as she has been so passionate about dance since a young age.

Paloma Fantova became famous for appearing in the Bollywood blockbuster titled ‘Zindagi Na Milegi Dobara’ in 2011. It was her Bollywood debut in which she gave a brilliant performance.

3- Belongs to a family of Artists

Paloma Fantova belongs to a family of artists as owing her passion for Flamenco to her father, Manuel Fantova, whose guitar playing skills sowed the seeds of her artistic passion from an early age. That’s so inspiring!

At the age of 7, she debuted through the Apolo Theatre of Madrid, located in Antonio Canales. While at the age of 8, she emerged as a winner at the young talent show aired on Spanish TV ‘Premios Veo Veo’.

Paloma Fantova has another feather in her cap as she was honored with the Best Newcomer Award (Premio Revelacion de Andalucia) at the age of 9.

At the age of 9, she performed with Farruquito and his family. It was the time when they paid tribute to Farruco, she participated in the program ‘Algo mas queue Falmenco’, presented by Sara Baras and Raimundo Amador.

7- Worked on the Choreographies

After gaining success day by day, the actress, Paloma Fantova traveled to Japan to work on the choreographies of Japanese dancers in ‘Manuela Carrasco’s show. And it was a wonderful experience for her.

In 2011, the PRO dancer performed as a guest at Jaoquin Cortes’ show named ‘Cale’ at the Haagen- Dazs Theatre in Madrid. She also performed at the Coliseum Theatre of Barcelona, danced as a lead in the tribute show to Carmen Amaya, which was held in the same year.