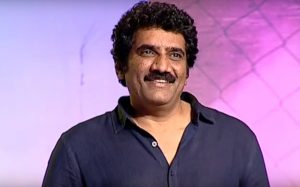 Rao Ramesh was born on 25th May 1968 in Srikakulam, Andhra Pradesh, India. He was raised and grew up in Chennai, India. He is the son of Gopal Rao who was also an acclaimed actor and worked in the South Indian film industry. Ramesha followed in his footsteps and pursued acting as a career and established his identity in the South Indian cinema where he worked in Telugu theatre, cinema, and television. He completed his schooling from Sri Ramakrishna Mission School in T.Nagar and later, pursued a degree in Communications.

Rao Ramesh started his career as a photographer and later, he joined K.S. Prakasa Rao, a cinematographer who was a brother of K.Raghavendra Rao. He worked with him as an assistant before moving to Bangalore where he learned industrial photography.

Initially, he appeared in Okkadunnadu which was released in the year 2007. In 2008, he made a major breakthrough named ‘Gamyam’ directorial of Krish. The best is, he got critical acclaim for portraying the role of a reformed Naxalite. Moreover, he has worked in many films, theatre plays, and television series for which he got immense love and appreciation.

During establishing a broad career, Rao Ramesh received huge acclaim and became successful for giving his best to the South Indian cinema. The actor is now considered among the best stars of the cinema where he spent the best phase of his life.

In 2008, Rao Ramesh’s critically acclaimed film named ‘Gamyam’ a best directorial of Krish went on to become one of the highest-grossing Telugu films of the year. And it was indeed the greatest achievement for him.