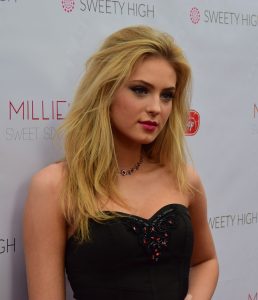 Saxon Sharbino was born on 11 June 1999 in Lewisville, Texas, USA. She is an actress. She is best known for her role in the Fox series Touch as Amelia Robbins alongside talented co-stars like Kiefer Sutherland, David Mazouz, and Gugu Mbatha-Raw. Saxon Sharbino is the eldest sister of actress Brighton Sharbino and singer/actor Sawyer Sharbino.

She attended Bridlewood Elementary School for a few years. While focusing on her acting career, she chose to finish school at home. HEnce, Sharbino was homeschooled during her high school years.

Saxon Sharbino has always been a talented star. She started doing acting at the age of nine. In 2012, Saxon Sharbino got her first major role with co-star Angela Bassett, Julian McMahon, and Louise Lombard, in Rogue TV Movie. In 2013, she appeared in Touch with Kiefer Sutherland and has done her role brilliantly. Also in 2013, Saxon Sharbino starred with William H. Macy and Amanda Peet in Trust Me which is a comedy/drama film. She stated that she had learnt a lot from the director Clark Gregg.

Saxon Sharbino also played the role of Kendra Bowen in the 2015 remake of Poltergeist which also starred Sam Rockwell and Rosemarie DeWitt. In 2016, Sharbino made her appearance in the two Netflix series ‘Love’, ‘Bedeviled’ which is a horror film.

She further made her appearance in the Hulu action-horror series ‘Freakish’ in 2015. In 2018, Sharbino starred with her sister Brighton, in the movie Urban Country. As of now, in 2020, the actress started to post regularly on her YouTube Channel.

In 2016, Saxon Sharbino was nominated for Young Artist Awards for the category Best Performance in a Feature Film – Supporting role, in Poltergeist (2015 remake).