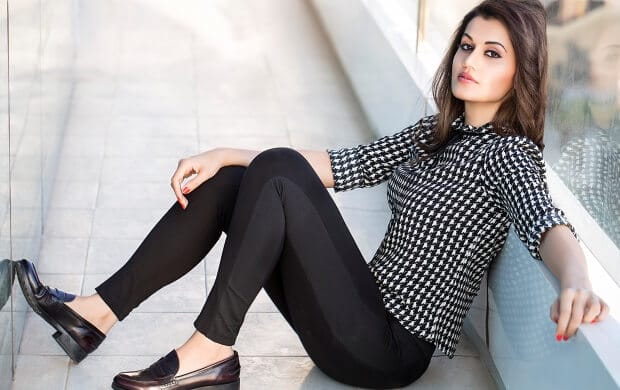 Taapsee Pannu was born on 1 August in the year 1987 in New Delhi in India, and she lives in Ludhiana in Punjab in India. The actress used to study at Mata Jai Kaur Public School in Ashok Vihar in Delhi. The star enrolled in Guru Tegh Bahadur Institute of Technology in New Delhi. The superstar has a degree of Bachelors in Technology in Computer Science from there. The audience has linked Taapsee Pannu with Mahat Raghavendra, a Tamil movie actor, and a Badminton player from Denmark known as Mathias Boe. The name of her dad is Dilmohan Singh Pannu. The name of the mom of the actress is Nirmaljeet Pannu. The star is elder to her sister called Shagun Pannu. The superstar still has to stumble upon the potential man of her dreams and tie the knot of eternity with him.

The first time that Taapsee Pannu enacted emotions was Jhummandi Naadam, a Telugu film in the year 2010. The next year, she entered the Tamil industry with a movie named Aadukalam. The same year, the actress ventured into the Malayalam industry and made an impactful appearance in a cinematic experience known as Doubles. With a project of art called Chashme Baddoor, the star stepped into the Bollywood industry. In the year 2016, the superstar shone in Pink. The next year, Taapsee Pannu dazzled in ventures, for example, Judwaa 2 and Naam Shabana. She showed her acting chops in Manmarziyaan, Mulk, Soorma, Badla, Saand Ki Ankh, Game Over, and Mission Mangal. Cinema-houses will release Thappad and Haseen Dilruba this year.

For Mr. Perfect, in the category of Best Actress of Jury, Santosham Film Awards honored Taapsee Pannu with a trophy in the year 2012. The next year, for Chashme Baddoor, in the category of the debut actress of the year, she won an award at the South Africa India Television and Film Awards. A year later, Edison Awards honored the star, for Arrambam, it recognized her for being the most energetic actress. For Pink, Lux Golden Rose Awards appreciated the superstar in the category of the rising star of the year. In the year 2018, Naam Shabana rose Taapsee Pannu to the heights of fame because she won awards in many award ceremonies for it.

Qualification: B TECH in Computer Science