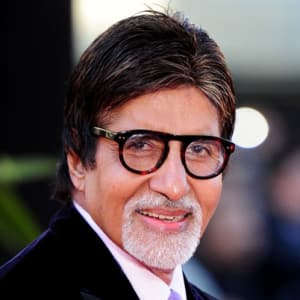 The ‘Shehenshah’ of Bollywood Amitabh Bachchan, is a massively known personality across India as well as in the entire world. He was born in Allahabad, India on 11th October 1942, to Teji Bachchan and Harivansh Rai Bachchan.

Before attending Delhi University Amitabh Bachchan went to Sherwood College boarding school. He earned a Bachelor of Arts degree. He became a freight broker in Calcutta after his graduation. Bachchan worked for nearly two years in Calcutta and realized that it’s time for a change. He decided to go to Bombay and try his luck in the Bollywood showbiz industry. The Indian cinema was also thriving and was looking for young talented stars.

Luckily Amitabh Bachchan made his acting debut in Saat Hindustani film (1969). He was so glad that he succeeded, captured the attention of directors, and soon enough, the offers for movies were pilling up. Bachchan rose to instant fame and popularity especially with his starring role in Zanjeer film which made him a big star.

From the 1970s to the 1980s, Amitabh appeared in more than 100 movies and got the wonderful opportunity to work with some of India’s most renowned directors such as Prakesh Mehra. His remarkable performances in films like Coolie no 1, Naseeb, Sooryavansham, Shaarabi, Sholay, Jadugar, and Laawaris continued his successful journey as a handsome action hero.

He actively participates in helping out social concerns. His yet another popularity is because he used to host a Television show known as ‘Kaun Banega Crorepati’, the Indian version of the Television game “Who Wants to Be a Millionaire?” resulting in more fame. His other titles are Angry Young Man, Shahenshah of Bollywood, Star of the Millennium, and Big B.

However, Amitabh Bachchan had a serious accident while shooting in 1982. Fortunately, he survives the accident with minor injuries. This made him change career paths and in 1984, he stepped into the world of politics. He traded his Bollywood stardom for a seat in the Indian Parliament. Due to unexpected controversy, he left his seat in 1987.

In the 1990s, Bachchan probably had thought it over and ended up making his own entertainment production company, Amitabh Bachchan Corporation Limited. He made himself CEO, the big news was all over the Indian headlines. Obviously, he didn’t let his stardom fade away just like that and he got back with acting.

Bachchan returned to the silver screen in 1997 with the film Mriptyudaata. During the 2000s, he hosted the show “Who Wants to Be a Millionaire”, the Indian version of the game. Despite the failures he faced in the 1990s to 2000s, Bachchan didn’t give up and climbed his way back up to stardom. He earned additional Filmfare as well as International Film Award nominations for his work in Khakee (2004), Paa (2009), and Baghban (2003). Amitabh Bachchan is the first Asian personality whose statue was exhibited in London’s Tussauds Wax Museum.

The Indian Government awarded Amitabh Bachchan with Padma Shri Award in the year 1984. For his participation in arts, Bachchan received Padma Bhushan Award in 2001 and Padma Vibushan Award in 2015. The Government of France honored him with its highest civilian honor, Knight of the Legion of honor, in 2007 for his exceptional career in the world of cinema and beyond. Bachchan also made an appearance in a Hollywood film, Baz Luhrmann’s The Great Gatsby (2013), in which he played a non-Indian Jewish character, Meyer Wolfsheim.

Amitabh Bachchan is married to Jaya Bhaduri in 1973. She is an actress and politician. They have two children together Abhishek Bachchan and Shweta Bachchan. Amitabh’s son is also an actor and his daughter is an author, journalist, and former model. Their both children are married. Abhishek tied the knot with fellow actress Aishwarya Rai and they have a cute little daughter named, Aaradhya. Shweta is also married to an Indian businessman named, Nikhil Nanda.

Amitabh Bachchan has won several awards during his lifetime. He has won sixteen Filmfare Awards and is the most nominated performer in any major acting category at Filmfare, with 42 nominations overall, and also won eleven Screen Awards. Bachchan has won numerous accolades in his career, including four National Film Awards as Best Actor, Dadasaheb Phalke Award as a lifetime achievement award, and many awards at international film festivals and award ceremonies.

Known For: Superstar of the Millennium

What is the truth behind the untold love story of Amitabh Bachchan and Rekha?

His romantic story began with the setting of Amitabh's film Do Anjane (1976). In the days leading up to their secret relationship, the couple met in a Bangalow of Rekha's friend. No one knew about their secret relationship until this event happened. During the shooting of Ganga Ki Sougandh (1978), Big B was accused of losing his cool on a co-on-screen character who was acting naughty with Rekha. Subsequently, his problem came to the attention of the media. The two denied the affair, though it was angry and it became clear that the two were dating each other. However, Amitabh Bachchan is still denying about his relationship with Rekha but she openly confessed her love for him

Amitabh Bachchan sent a legal notice to Dr.Kumar Vishwas, who is a famous writer. The reason behind sending a legal notice was copyright violence. Dr. Kumar Vishwas uploaded the two poems of renowned poet Dr. Harivansh Rai Bachchan who was a father of Amitabh Bachchan. However, Amitabh calls Dr.Vishwas for copyright violation. Dr. Vishwas sent a notification. Bizarrely, considering the notification, Dr. Vishwas sent 32 rupees to Amitabh, that he earned it on YouTube after uploading his father's two poems.

What is the role of Amitabh Bachchan in Anti-Sikh Riots?

Bollywood 's superstar, Amitabh Bachchan, argues that he was blamed for the use of the hate slogan 'blood for blood' in television channel Doordarshan in the context of the 1984 Sikh uprising. However, he denied the claim. In October 2014, the court in Los Angeles 'allegedly instigating violence against the Sikh people.'

Why Amitabh Bachchan's name appeared twice in the Panama Papers?

The name of Amitabh Bachchan has appeared twice in the Panama Papers and Paradise Papers, a classified archive released by Vicky Spiele. The actor denies his union in any of the marine specs.

Why Amitabh Bachchan was banned by Stardust?

He had close relations with Gandhi's family and he tried to shut down the magazine stardust. Due to this, Stardust had suffered a lot and also censors got harsh as well. However, all the press and magazines formed an association and they imposed a ban on the actor.