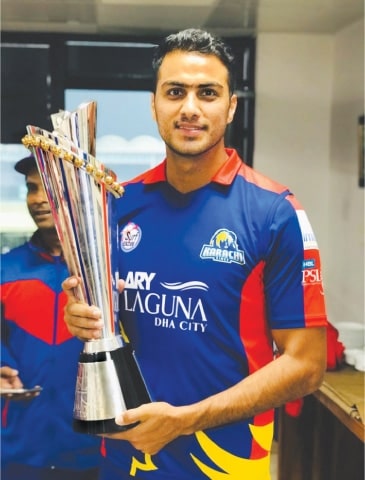 Arshad Iqbal is a cricketer of Pakistan. His date of birth is 26 December 2000. He belongs to a military background family as his father Gul Haider was a captain of the Pakistan Military. Arshad’s birthplace is the village of Maneri Payan, which is located in the Swabi District of Khyber Pakhtunkhwa (KPK). Arshad is a right-arm fast bowler and a right-handed batsman. He is mostly known for his bowling skills. He is High School Graduated and currently focusing on his career as a cricketer.

Arshad Iqbal started his career as a cricketer in 2015 when he was a teenager. He first played in PCB-PEPSI Cricket Stars U-16 Two Day Tournament 2015 with team Abbottabad Under 16s. In May 2016, Arshad played in Regional Inter District U-19 Tournament 2016-17 with team Swabi Under-19s. Arshad for selected for team Khyber Pakhtunkhwa in Pentangular U-19 T20 Cup 2017/18, it was his first T20 debut. Later In 2018, He first played List A in Quaid e Azam One Day Cup for team Water and Power Development Authority on 16 October 2018. On 16 October 2019, he again played for team Khyber Pakhtunkhwa against Sindh in National T20 Cup 2018/19.

Arshad Iqbal is the best bowler of team Karachi Kings. In Pakistan Super League 5 he achieved a reward for his brilliant bowling skills against Lahore Qalandar. In 2021, he took 3 wickets of team Quetta Gladiators in the first match of Pakistan Super League season 6 and he got the title of Best Bowler in the match.