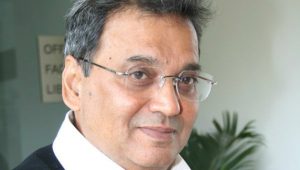 Subhash Ghai is a renowned film director, screenwriter as well as a film producer who has been serving Bollywood film industry since the year 1970. An exceptional film producer, Subhash Ghai was born in Nagpur, India on 24th January, 1945.

A well-regarded intellectualize, Producer, Director and an excellent Filmmaker, Subhash Ghai initiated his career in 1970. He arrived in Bollywood film industry after successfully completing his certified course from Television & Film Institute of India in 1963. Subhash Ghai is a commerce alumnus from Rohtak.

This renowned filmmaker has not only directed and produced a number of superhit movies but also polished a number of megastars in Bollywood Film Industry. A few of his long-running and most popular movies are Taal, Saudagar, Kaalicharan, Pardes, Meri Jung, Khalnayak, Vidhaata, Hero, Yaadein, Kisna and Trimurti.

Subhash Ghai has also directed a number of movies under his banners such as Apna Sapna Money Money, 36 China Town, Iqbal and Aitraaz. In the year 2007, he took an interval from Bollywood film industry right after the release of his movie 36 China Town. Though in 2008, he returned back with movies such as Black & White and Yuvraaj. Both the movies prospered well at Indian box-office and he hasn’t produced or directed a single movie after this. Subhash Ghai also has an institute called Whistling Woods International, which is located in Mumbai. This Institute trains the people professionally in the field of filmmaking, acting, cinematography, direction, production and animation.

His most noticeable movies consist of Karz, Kalicharan, Meri Jung, Hero, Ram Lakhan, Karma, Khalnayak, Saudagar, Taal and Pardes. In the year 1982, he also instituted ‘Mukta Arts’, a film production establishment, and is called as the “showman” of Indian Cinema, for making superhit movies that depict grandeur and an ironic theme.