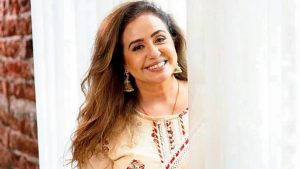 A most talented star, Vandana Sajnani Khatter who is known for her incredible talents. She is not just an actress, yet a successful producer, and director. She is known for being the wife of Rajesh Khatter who is also a great actor, works in the Bollywood film industry. She studied Bachelors of Commerce, living in Mumbai. She has established her own identity in the film industry by working on multiple projects. She has three sons with Rajesh Khatter, named ‘Vanraj Krishna Khatter and Ishaan Khatter(Stepson), and Shahid Kapoor, (Stepson).

Vandana Sajnani took the start of her career as a theatre actress and performed on stage in various plays. Also, she worked as a television actress, director, and producer. She was born in Mumbai and got her education from there. She has two sisters and brothers. Vandana Sajnani acted in many hit plays, such as; Adhe Adhure, Bhagam Bhaag, and Apas Ki Baat, directed by Dinesh Thakur. Also, she acted in English plays, such as; Wait Until Dark, and many more that are popular. Additionally, she acted in Indian television serials, such as; Kartavya; aired on Zee TV, Saathiya, aired on Sahara TV, and many more. Moreover, she made brilliant appearances in Bollywood movies, like; Corporate, starring Anil Kapoor in 2006 ‘Dil Dharakne Do, in 2015, starring Farhan Akhter, Priyanka Chopra Jonas, etc and many more that are worth sharing to watch. However, she has made her broad career and got much success.

In 1995, the actress was honored with the title of Miss Mumbai. She calls it her first achievement in her life. Afterward, she won various awards and honors, and the best is, she got lasting success and fame in her showbiz career.