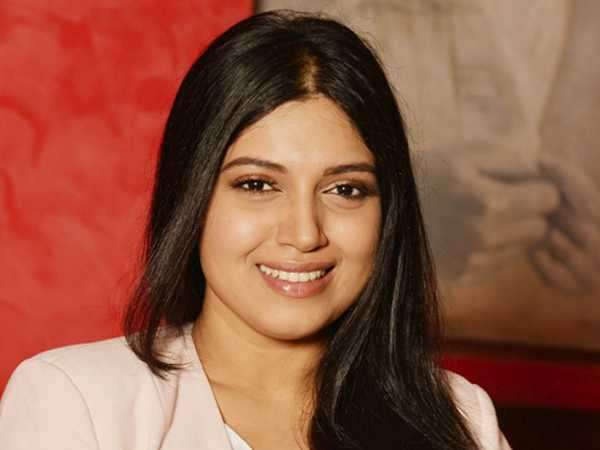 Bhumi Pednekar is a famous Indian actress who started her career in acting with esteemed YRF’s production ‘Dum Laga Ke Haisha’ in the year 2015, wherein she played  her leading character of an overweight girl. Bhumi Pednekar was believed to be casting director of the movie while she was casted to perform a demo for other actors, though Bhumi had no idea that what actually it was, indeed, her very own audition for the movie.

Bhumi Pednekar has also performed in a television series named ‘Man’s World’ which spoke about some significant issues such as Gender discrimination and has acted in movies like ‘Toilet – Ek Prem Katha’ and ‘Shubh Mangal Savdhan’.

Bhumi Pednekar was born in Mumbai on 18th July, 1989. She was born to a Maharashtrian Father, Satish Pednekar and Haryanvi Mom, Sumitra Pednekar. Bhumi completed her schooling from Arya Vidya Mandir and has a residence in Mumbai. She did her job as an Assistant Casting Director for Yash Raj Movies prior getting into the field of acting. Bhumi Pednekar was born in a multi-cultural family, with a Haryanvi Mother, Maharashtrian Father and a sister named Samiksha Pedneker.

Bhumi Pednekar made her first debut in the movie ‘Dum Lagaake Haisha’ in which she played the role of an overweight woman Sandhya Varma. For this reason, she had to gain on 30 Kg weight approx. After this movie released, Bhumi went on a severe diet and exercise routine with the intention of losing 35kgs of weight. She won a number of awards for this debut role, ensuring a prosperous career in Bollywood movies.

Afterward, Bhumi Pednekar went on to appear in movie ‘Toilet: Ek Prem Katha’ with the most famous actor Akshay Kumar. In this movie, she plays the character of a middle-class wife. This movie was made in favor of Indian Prime Minister Narendra Modi’s Swachh Bharat Abhiyaan.  She will next be appeared in the movie ‘Shubh Mangal Savdhan’ with co-star Ayushmann Khurana.