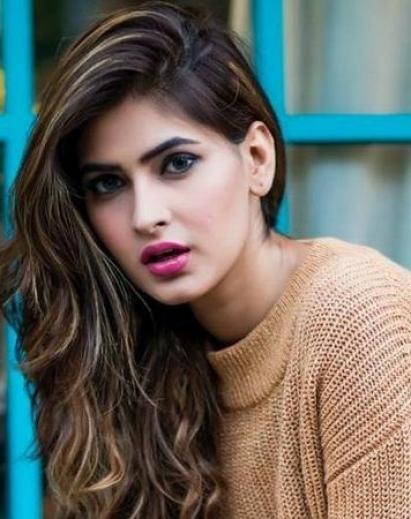 Karishma Sharma is a talented and young actress of Bollywood, who has won the hearts of audience heart by means of her magnificent acting. This gorgeous actress has performed in both TV series as well as movies.

Karishma Sharma was born in Delhi, Indian on 22nd December 1993. She appeared in a number of television drama series such as “Pyar Tune Kya Kiya”, Ye Hain Mohabbatein”, Pavitra Rishta”. Moreover, she has performed in the movies “Pyaar Ka Punchnama 2” and “Ragini MMS Returns”. Karishma has shared screen with the well-known actors like Kartik Aaryan, Riya Sen and Nishant Singh. Karishma Sharma was grown up in the city of Delhi. she also completed her education from Delhi. She was highly fascinated towards modeling and acting since her childhood.

This sizzling and hottest actress is about 5 feet 5 inch tall with a weight of approx. 124 Ibs. Her black color hair and brown eyes enhance the inner charm of her. Karishma Sharma is a follower of Hinduism and her star sign is Capricorn. Being one of the rising stars, Karishma Sharma is not afraid of keeping her love life hidden. She is passionately dating with the guy Yuvraaz Arora. In the past, she was also in a romantic relationship with the guy Omar Nensey.

All through this period, she starred in the leading role of Pia Arjun Kirloskar considered amongst one of the most popular Television series, Pavitra Rishta which made her name all across India. After getting a huge fame from TV series, Karishma has a step forward entrance in B-Town from AKT Balaji‘s produced and Suyash Vadhavkar directed sexy-horror film series, Ragini MMS – Returns.

The film starred Siddharth Gupta, Riya Sen and Nishant Singh in a leading role. This movie was released on 19th October 2017 which is the 3rd segment of Ragini MMS project. Karishma Sharma has given a number of bold scenes in the movie and praised for her role.

She has all set a bright future in Bollywood. Karishma has received name as one of the most leading bold actresses across Indian cinema. She has earned a handsome sum of money from series and movies.