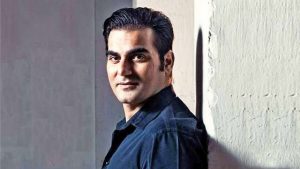 Arbaaz Khan is a well-known Indian actor, filmmaker, director typically recognized for his remarkable work in Hindi cinema. He belongs to a family with strong bonds to the Bollywood industry: His father’s name is Salim Khan, a flourished scriptwriter and his Mom is Salma Khan, whilst his stepmother is a dancer and renowned Bollywood actress Helen.

He is the brother of famous actors Sohail Khan and Salman Khan. His sister named Alvira Khan is married to Bollywood artist Atul Agnihotri. In the year 1996, he made his acting debut with the movie Daraar wherein he delivered a considerable performance in a villainous character of a psychotic wife-beater. He also received Filmfare Award for the Best Villain performance.

Although not a successful actor in his solo movies, he has appeared in a number of multi-starrer hit movies like Garv: Pride and Honour and Pyaar Kiya To Darna Kya wherein he appeared alongside his brother Salman.

He played the role of a villain in the movie Qayamat: City Under Threat which was a successful movie at the Indian box office.  Arbaaz also played some supporting roles in the superhit Priyadarshan, comedy film Hulchul, Bhagam Bhag, and Malamaal Weekly. He also played a supporting role as a mobster and police officer, correspondingly in the multi-staring Fool and Final and Shootout at Lokhandwala in the year 2007.

Arbaaz Khan also made an appearance in the megahit blockbuster Jaane Tu Ya Jaane Na, starring Genelia D’Souza and Imran Khan. In 2003, He also starred in the television serial Karishma: A Miracle of Destiny. He has starred on television programs from time to time. Arbaaz Khan was married to a famous actress and model Malaika Arora. The couple has one son named Arhaan who was born in 2003.